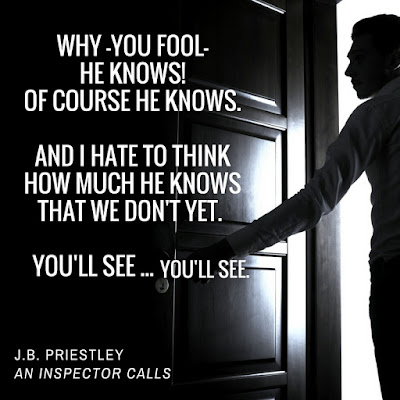 Up next on our mainstage is An Inspector Calls, by English dramatist J.B. Priestley. Written in the winter of 1944-45 (near the end of World War II), this drawing-room thriller is picturesquely set in an upper-middle-class home just before the advent of World War I. Taking place on a single night in 1912, the Birling family is visited by a an Inspector who subjects the family to a relentless series of questions regarding the death of Eva Smith: a young working class woman.

Priestley began writing plays in the early 30’s after a successful career as a novelist and essayist: his book The Good Companions (1920) became a bestseller and largely freed him financially. Writing for the stage offered the opportunity to experiment – particularly with the dramatic possibilities of time. Priestley explored a mystical dimension in his work that led the psychologist Carl Jung to praise his “superhuman faculty of looking at things with a straight and an inverted eye.”

An Inspector Calls received its West End debut in August 1946, but initially opened in Russia in the autumn of 1945. As there were no theatres available in London at the time, Priestley responded to the invitation for an extraordinary seven week tour immediately after the war ended.

Long considered one of the classics of 20th century theatre, An Inspector Calls has been hailed as a scathing critique of Victorian / Edwardian society and an expression of Priestley’s political values. Packaged in a comforting period remoteness, and presented in the manner of an Agatha Christie mystery, the play evolves into a confrontation between capitalism and socialism, embodying principles not typically found in a detective genre. Though every member of the family denies connection with the victim, as the evening wears on, the contrary becomes quickly apparent, and the implications call everyone's conscience into question.

After a remarkably productive lifetime, spanning most of the 20th century, J.B. Priestley died on August 14, 1984. His plays are performed all over the world, spurred on by Stephen Daldrey’s triumphant and imaginative 1992 production of An Inspector Calls, called “Theatrical Perfection” and the “winner of more awards than any other production in history.” (The Daily Telegraph)
So, come and join the inquisition, to see if you can catch the culprit. Directed by Karl Sine, Rosebud Theatre’s An Inspector Calls plays Sept 9 – October 29 and stars Nathan Schmidt, Troy O’Donnell, Glenda Warkentin, Andrew Cooper, Meghan Hanet, Junstin Lanouette, and Cassie Garbutt. For tickets and information, visit rosebudtheatre.com

This is us "behind-the scenes" - An insider's look at what makes Rosebud Theatre a wonder-filled destination where actors, directors and designers weave magic through stories and experience. Here, the chaos of creation takes center-stage as we look at the collaboration and community that makes us who we are, and inspires the art we make.